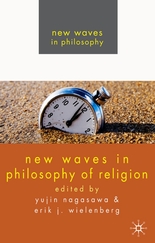 New Waves in Philosophy of Religion, edited by Y. Nagasawa & E. Wielenberg, discusses the “perennial problems and emerging issues from refreshingly new points of view and develop original ideas. It addresses such topics as: divine attributes, the origin of the universe, evolution and design, implications and puzzles of religious doctrines, morality and God, and the meaning of life.”

Contents of the book is as follows: