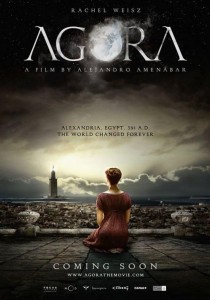 December is still more than six months away which means we have quite some time to wait before we can see the movie Agora.

According to Wikipedia, “Agora is an upcoming 2009 historical drama film directed by Alejandro Amenábar, written by Amenábar and Mateo Gil, and starring Rachel Weisz and Max Minghella. It was screened Out of Competition at the 2009 Cannes Film Festival. It will then get a general release on December 18, 2009.”

The movie is about the love story of astrologer-philosopher Hypatia of Alexandria (Rachel Weisz) and her slave Davus (Max Minghella). It is more than a love story though because it also shows what went on during Hypatia’s time in the 4th century when religious persecution was rampant among Christians and Jews. Racehl Weisz says empathically of the story, “It’s the true story of a fourth-century woman and, in some ways, nothing much has changed. We’ve evolved in so many ways, and in others we haven’t evolved at all. We can go into outer space and travel to the moon; we can cure certain diseases; but we still kill each other in the name of religion. It seems so primitive to still be doing that.” How true.

The real Hypatia was a Greek scholar from Alexandria in Egypt. Aside from being a philosopher and astronomer she was also the first notable woman in mathematics. Hypatia died in the hands of a Coptic Christian mob who blamed her for religious turmoil.