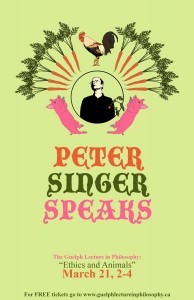 The Department of Philosophy of the University of Guelph will be inviting a speaker every year to their campus hold an event called The Guelph Lecture in Philosophy. This is the very first year that the event will be held. The inauguration of the Guelph Lecture in Philosophy will be held on March 21 from 2 to 4pm at the Rozanski Hall in Guelph. The lecturer, Peter Singer, will speak on “Ethics and Animals”. Everyone is invited to come and listen to the lecture. NO ADMISSION FEE.

Peter Singer is the Ira W. DeCamp Professor of Bioethics at Princeton University, and laureate professor at the Centre for Applied Philosophy and Public Ethics (CAPPE), University of Melbourne. He is best known for his book Animal Liberation, which is credited by some for the formation of the animal rights movement as we now know. With a utilitarian approach to ethics he asserted the principle of minimizing suffering in his book and argued that animals have rights and these rights should be based on their ability to feel pain. Singer’s latest book, The Life You Can Save: Acting Now to End World Poverty, is fresh out of printing. Though I haven’t got hold of a copy yet but it promises to be a riveting read based not only on the topic itself and Singer’s reputation but from the first few paragraphs shown in the book’s website.

With such a distinguished guest it is no wonder Prof. Andrew Bailey of Guelph’s Philosophy Department feels that they are indeed fortunate.