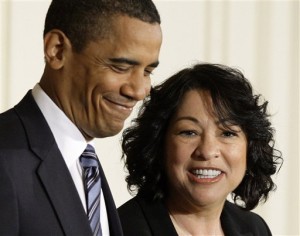 With the Sotomayor hearings pervading the news it is no wonder that I have become a bit pre-occupied with judicial philosophy. The big hoopla the US senators, both for and against Sotomayor’s confirmation, have been making over empathy and it’s role or non-role in the judicial system is a very interesting matter.

Lately I came across Michael C Dorf’s article “What is Sonia Sotomayor’s Judicial Philosophy?” and just feel that I have to share his wonderful insights on “formalism” and “legal realism”. According to Dorf, “formalists believe that legal interpretation is a matter of finding the objective meaning of formal legal materials, such as the words of statutes and constitutional provisions.” He says that ideology has no place in formalism and the judges are seen as “simply a vehicle for the expression of the law.” On the other hand, he says that legal realists assert that “formalist’s view of the law is false, or at least radically incomplete.” He further explained that “legal realists believe that formalists are not being honest (perhaps, not even with themselves) when they disclaim any influence from their own values upon their judicial decision making. Nor, they say, could matters be otherwise in a complex and evolving society in which legislators and constitution writers cannot possibly have anticipated all of the circumstances in which the provisions they wrote would be applied.”

So it is quite clear that the contention between those that want to confirm Judge Sotomayor and not is caused by the differing jucidicial philosophy. The question of course lies in who is right – the formalist or the legal realist? I leave it up to the senate committee to sort it out.