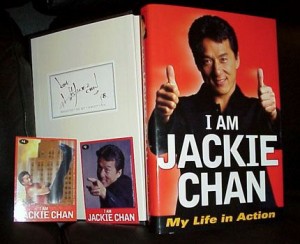 After reading the latest news about Jackie Chan and his comments about the Chinese people I think he’ll make a great topic for the next volume of the Popular Culture and Philosophy® series of Open Court Publishing. The book can be titled “Jackie Chan and Philosophy: Chinese Martial Arts and the Art of Kicking Your People in the Teeth.” Of course since I adore Jackie Chan as an actor the book can also tackle his movie philosophy, his sense of humour, and the real reason behind his seemingly masochistic tendencies when it comes to stunts. These things alone would make for enough material to write a philosophy book on Jackie Chan but add to that his latest anti-Chinese freedom remarks and you’ve got one interesting character to analyze, someone worthy of a philosophy book.

So what were the things he said that landed him the honor of being considered to be submitted by yours truly to Open Court? Here are snippets of his controversial comments during the panel discussion at the annual Boao Forum for Asia last April 18.

“Sure, we’ve got 5,000 years of history, but our new country has just been around for 60 years and the reforms for 30 years. It’s hard to compare us with other countries. But I feel that in the 10 years after Hong Kong’s return to Chinese rule, I can gradually see, I’m not sure if it’s good to have freedom or not.”

“I’m gradually beginning to feel that we Chinese need to be controlled. If we’re not being controlled, we’ll just do what we want.”